It’s a utopian fantasy discover a ghost town and rebuild it in line with your ideals-, but in Spain where there are nearly 3000 abandoned villages (most dating back to the Middle Ages), some big dreamers have spent the past 3 decades doing just that.

There are now a few dozen “ecoaldeas” – ecovillages – in Spain, most build from the ashes of former Medieval towns. One of the first towns to be rediscovered was a tiny hamlet in the mountains of northern Navarra. 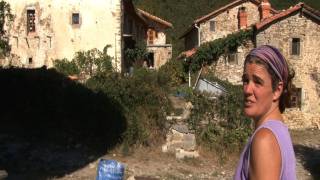 Lakabe was rediscovered in 1980 by a group of people living nearby who had lost their goats and “when they found their goats, they found Lakabe”, explains Mauge Cañada, one of the early pioneers in the repopulation of the town.

The new inhabitants were all urbanites with no knowledge of country life so no one expected them to stay long. When they first began to rebuild, there was no road up to the town so horses were used to carry construction materials up the mountain. There was no electricity either so they lived with candles and oil lamps.

Click here to read this article from True Activist