1. Edinburgh Castle is built high on an impressive 700 million year old extinct volcano called Castle Rock, in the middle of what is now the city of Edinburgh. People have lived on Castle Rock since the Bronze Age, around 850 BC, and there has been a royal castle on the site since at least the 12th century. 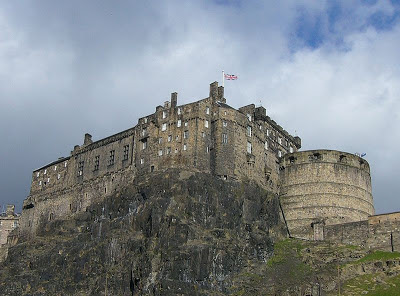 5. The ‘Stone of Destiny’ or ‘Stone of Scone’ is kept at the castle with the crown jewels of Scotland. The stone is the traditional coronation stone of all Scottish and English Kings and Queens and has been much fought over by England and Scotland over the ages. As legend has it, the real stone was swapped for a fake either in the 13th century or the 1950’s, and to this day the authentic stone is still secretly hidden.

7. The castle is also one of the most haunted places in Scotland, one famous ghost being the Lone Piper. As the story goes, a few hundred years ago secret tunnels were discovered deep underground, running from the castle to other places in the city. A piper boy was sent down to investigate, instructed to constantly play his pipes, so those above could chart his progress through the tunnels. When the playing suddenly stopped, they went and searched for the piper boy but he had vanished. His ghostly pipes can still be heard playing in the castle to this day, as he eternally walks the dark tunnels beneath.