Father Paul Mark Schwan shivers in the morning chill of California's Sacramento Valley, a blue hooded sweatshirt layered over his monk's robes. It's almost eerily quiet at the Abbey of New Clairvaux, an order of Cistercian monks in this town 20 miles north of Chico, where Schwan serves as abbot. A blanket of mist hugs the walnut orchards as the abbot picks his way across the muddy ground. 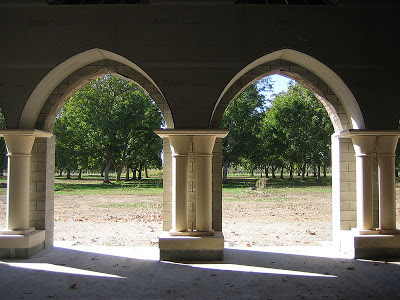 Before him lies a surreal site: an intact medieval church with vaulted limestone walls and peaked windows, looking as if it was dropped there by accident.

"I believe these stones were going to be used as a changing room for an indoor swimming pool," says Schwan, 56, looking thoughtfully at the building. "Thanks be to God it didn't happen."

This is the famous Chapter House of Ovila - a Spanish Trappist monastery built in the 12th century, rebuilt in the 16th century and with a history so dramatic, it almost belongs in a pulp novel. Originally imported by William Randolph Hearst to be used in a grand estate that never was, the monastery stones were all but abandoned in Golden Gate Park for more than 60 years.

But through the tireless lobbying of Schwan's predecessor, and a 12-year campaign by the monks to raise $7 million for a painstaking reconstruction, those stones found a home in Vina.

Click here to read this article from the San Francisco Gate