When Newspapers Were New, or, How Londoners Got Word of the Plague 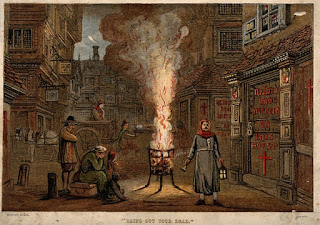 The plague was abroad. Londoners knew not where it had come from, only that it was upon Holland. "It was brought, some said from Italy, others from the Levant, among some goods which were brought home by their Turkey fleet; others said it was brought from Candia; others from Cyprus," Daniel Defoe wrote in the opening of his historical novel, A Journal of the Plague Year.

The book, which many read as something like non-fiction, bore the webby subtitle, being observations or memorials of the most remarkable occurrences, as well public as private, which happened in London during the last great visitation in 1665, and bore stamps of authenticity -- it was "Written by a citizen who remained all the while in London" -- and intrigue, having "Never [been] made public before."

Which, as a journalist of the web era, made me think: that Defoe knew how to gin up some pageviews! And in fact, Defoe did. (If you can't see the translation to the headline argot du jour, allow me: 73 Amazing and Horrible Things That Happened During the Plague, From Someone Who Saw Them With His Own Two Eyes. And no, I didn't count. But the point is: no one's counting.)