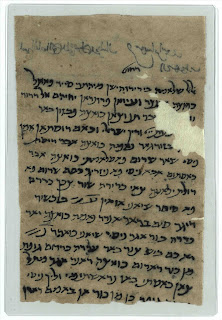 A trove of ancient manuscripts in Hebrew characters rescued from caves in a Taliban stronghold in northern Afghanistan is providing the first physical evidence of a Jewish community that thrived there a thousand years ago.

Researchers say the "Afghan Genizah" marks the greatest such archive found since the "Cairo Genizah" was discovered in an Egyptian synagogue more than 100 years ago, a vast depository of medieval manuscripts considered to be among the most valuable collections of historical documents ever found.

The Afghan collection gives an unprecedented look into the lives of Jews in ancient Persia in the 11th century. The paper manuscripts, preserved over the centuries by the dry, shady conditions of the caves, include writings in Hebrew, Aramaic, Judea-Arabic and the unique Judeo-Persian language from that era, which was written in Hebrew letters.