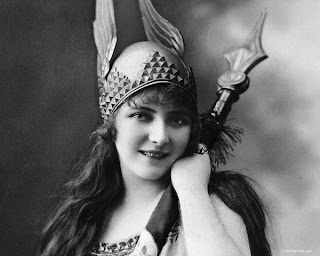 “To assume that Viking men were ranked above women is to impose modern values on the past, which would be misleading,” cautions Marianne Moen. She has been studying how women’s status and power is expressed through Viking burial findings. Her master’s thesis The Gendered Landscape argues that viking gender roles may have been more complex than we assume.

Exploring new perspectives of Viking society is a theme which also will be the focus of the forthcoming Viking Worlds conference in March 2013, where Moen is a member of the organising committee.

Our assumptions of gender roles in viking society could skew the way we interpret burial findings, Moen points out. She uses the 1904 excavation of the Oseberg long boat to illustrate the point. Rather than the skeleton of a powerful king or chieftain, the ship surprisingly contained two female skeletons. “The first theories suggested that this must be the grave of queen Åsa mentioned in Snorri’s Ynglinga saga, and that the other skeleton was her slave servant,” says Moen. Åsa Haraldsdottir was the mother of Viking king Halfdan the Black.

However, later carbon dating revealed that the buried ship was from around 834 AD - a date which made this theory unfeasible. But the idea of a queen mother and her servant became persistent amongst archaeologists.

Click here to read this article from Science Nordic

Click here to read her thesis The Gendered Landscape: A discussion on gender, status and power expressed in the Viking Age mortuary landscape

Click here to learn more about the Viking Worlds Archaeology Conference, which will be held in Oslo