American Historical Association: Openings and New PhDs on the Rise: The 2012 Jobs Report 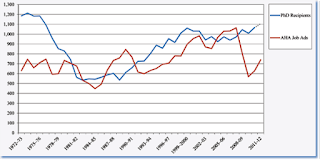 The number of job openings advertised with the AHA in the 2011–12 academic year increased by 18 percent over the year before—rising for the second time in a row. Unfortunately, other evidence shows the competition for academic positions also continued to grow, and the squeeze on full-time faculty positions continued.