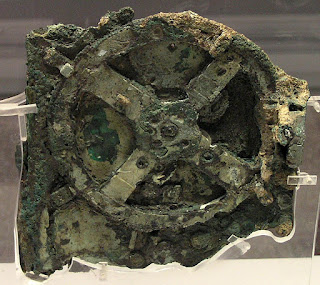 Ancient artifacts resembling the Antikythera mechanism, an ancient bronze clockwork astronomical calculator, may rest amid the larger-than-expected Roman shipwreck that yielded the device in 1901.


Marine archaeologists report they have uncovered new secrets of an ancient Roman shipwreck famed for yielding an amazingly sophisticated astronomical calculator. An international survey team says the ship is twice as long as originally thought and contains many more calcified objects amid the ship's lost cargo that hint at new discoveries.

At the Archaeological Institute of America meeting Friday in Seattle, marine archaeologist Brendan Foley of the Woods Hole (Mass.) Oceanographic Institution, will report on the first survey of Greece's famed Antikythera island shipwreck since 1976. The ancient Roman shipwreck was lost off the Greek coast around 67 BC,filled with statues and the famed astronomical clock.

"The ship was huge for ancient times," Foley says. "Divers a century ago just couldn't conduct this kind of survey but we were surprised when we realized how big it was."

Click here to read this article from USA Today