Scholar to research charity and guilt in medieval Champagne 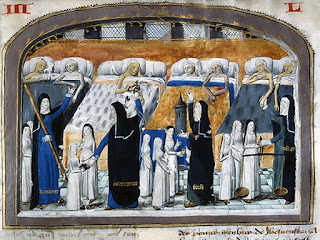 Adam Davis is a historian whose research causes him to straddle centuries on a daily basis. Now, the associate professor has received a yearlong fellowship from the National Endowment for the Humanities to dig deeper into the 12th and 13th centuries in Champagne, France. Davis will study hospitals, wills, charitable practices of the day, and even medieval guilt.

On the face of it, examining the source documents of medieval French hospitals doesn’t sound like uncovering King Solomon’s mines, but Davis begs to differ. He says he’s actually studying a previously unknown charitable revolution.

In earlier times, monasteries provided care for the poor and sick. But during the 12th and 13th centuries, wealthy laypeople founded hundreds of hospitals to provide for Europe’s needy. In the Middle Ages, hospitals were multifunctional religious institutions—almost a hybrid between a shelter, nursing home, and inn—housing the sick, poor, and powerless, as well as travelers.

“By the 13th century, hospitals had become one of the most popular recipients of charitable bequests,” says Davis. “In a number of regions, well over half of testaments, left by people from all cross-sections of life included bequests for hospices, hospitals, and leprosaries (quarantined houses for patients suffering from leprosy).”

Click here to read this article from Denison University