English is a Scandinavian language 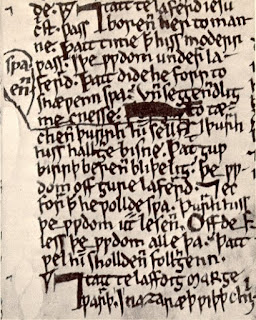 Contrary to popular belief, the British did not 'borrow' words and concepts from the Norwegian and Danish Vikings and their descendants. What we call English is actually a form of Scandinavian.


"Have you considered how easy it is for us Norwegians to learn English?" asks Jan Terje Faarlund, professor of linguistics at the University of Oslo. "Obviously there are many English words that resemble ours. But there is something more: its fundamental structure is strikingly similar to Norwegian. We avoid many of the usual mistakes because the grammar is more or less the same.

Faarlund and his colleague Joseph Emmonds, visiting professor from Palacký University in the Czech Republic, now believe they can prove that English is in reality a Scandinavian language, in other words it belongs to the Northern Germanic language group, just like Norwegian, Danish, Swedish, Icelandic and Faroese. This is totally new and breaks with what other language researchers and the rest of the world believe, namely that English descends directly from Old English. Old English, or Anglo-Saxon, is a West Germanic language, which the Angles and Saxons brought with them from Northern Germany and Southern Jylland when they settled in the British Isles in the fifth century.


"Modern English is a direct descendant of the language of Scandinavians who settled in the British Isles in the course of many centuries, before the French-speaking Normans conquered the country in 1066," says Faarlund. He points out that Old English and Modern English are two very different languages. Why?

"We believe it is because Old English quite simply died out while Scandinavian survived, albeit strongly influenced of course by Old English," he says.

Click here to read this article from the University of Oslo

See also The History of English in Ten Minutes