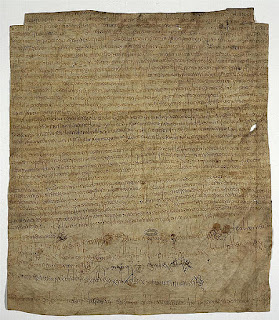 Around a million medieval documents have no date making their historical significance difficult to quantify. But automated computer techniques look set to revolutionise the work for historians.

An important aspect of any society is the way it keeps records of property and land transactions so that ownership can be properly established and disputes resolved. In medieval Britain, this process was largely carried out by religious or royal institutions which recorded transactions in documents, written in Latin, called charters.

Today, more than a million charters survive either as originals or more often as ancient copies. They provide a remarkable insight into the pressures at work in medieval politics, economics and society between the tenth and fourteenth centuries in England.

For example, historians can use these documents to study the rise and fall of military and religious organisations. A good example is the Order of the Hospital of Saint John of Jerusalem, a religious and military organisation set up after the western conquest of Jerusalem in the 11th century (the First Crusade). Historians say the charters clearly show how the organisation became militarised in response to the call for a Second Crusade in 1145, triggered by Muslim forces recapturing various towns in the region. Clearly, these documents have huge historical value but there is a problem: most charters are not dated, particularly during the period of Norman rule between 1066 and 1307.

Click here to read this article from the MIT Technology Review