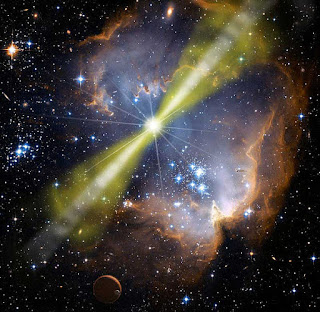 A massive burst of inter-stellar radiation may have stuck the Earth in the middle ages, researchers have announced. It is thought that the explosion occurred when two black holes or neutron stars collided somewhere in the Milky Way.

The resultant gamma ray burst sent shockwaves through the galaxy, and hit our planet in the eighth century AD, the German team behind the study told the BBC. It is the latest development of the theory that the middle ages saw a spike in the amount of radiation that can now be found in trees and rocks.

In 2012 a Japanese team found that ancient cedar trees had high levels of carbon-14, an isotope which is created when radiation strikes atoms in our upper atmosphere. Further research on radiation found in ice in the USA pinned the explosion down to between 774 and 775 AD.

An entry in the Anglo-Saxon Chronicle for the year 774 reads: "This year also appeared in the heavens a red crucifix, after sunset; the Mercians and the men of Kent fought at Otford; and wonderful serpents were seen in the land of the South-Saxons."

Click here to read the article: A Galactic short gamma-ray burst as cause for the 14C peak in AD 774/5