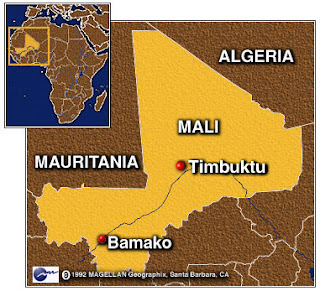 The fabled city of Timbuktu, a place of enigma for centuries, has now given the world another mystery: What happened to thousands of priceless, ancient manuscripts that have vanished into the dusty Sahara winds?

When hundreds of French soldiers rolled into the remote desert city in northern Mali on Monday, cheered by thousands of residents who were ecstatic that the Islamist rebels had fled, one of the biggest fears was the fate of Timbuktu’s ornately crafted manuscripts, as precious to world history as the Dead Sea Scrolls.

The city’s mayor, exiled far away in Mali’s capital, alleged that the Islamist extremists had torched the manuscript libraries, burning them to the ground. This was quickly disproved by a Sky TV crew embedded with the French soldiers, who found the main library intact, alleviating the worst fears of many scholars.

Inside the library, television reports showed a few small piles of ash, along with dozens of empty boxes. Up to 10,000 manuscripts were gone. The immediate assumption was that the Islamist militia groups had stolen or destroyed them – although subsequent reports suggested that many of them had been hidden and saved.