A long-delayed restoration of the Colosseum's only intact internal passageway has yielded ancient traces of red, black, green and blue frescoes – as well as graffiti and drawings of phallic symbols – indicating that the arena where gladiators fought was far more colorful than previously thought.

Officials unveiled the discoveries Friday and said the passageway – between the second and third levels of the first century Colosseum – would open to the public starting this summer, after the 80,000 euro restoration is completed. 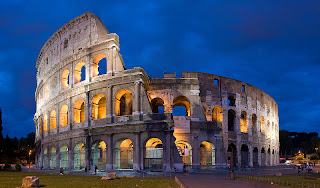 The frescoes were hidden under decades of calcified rock and grime, and were revealed during a cleaning and restoration project over the last two months. The traces confirmed that while the Colosseum today is a fairly monochrome gray travertine rock, red brick and moss-covered marble, in its day its interior halls were a rich and expensive Technicolor.