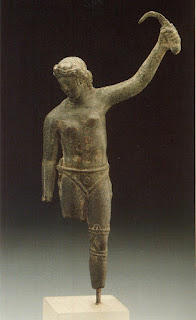 A small bronze statue dating back nearly 2,000 years may be that of a female gladiator, a victorious one at that, suggests a new study.

If confirmed the statue would represent only the second depiction of a woman gladiator known to exist.

The gladiator statue shows a topless woman, wearing only a loincloth and a bandage around her left knee. Her hair is long, although neat, and in the air she raises what the researcher, Alfonso Manas of the University of Granada, believes is a sica, a short curved sword used by gladiators. The gesture she gives is a "salute to the people, to the crowd," Manas said, an action done by victorious gladiators at the end of a fight.

The female fighter is looking down at the ground, presumably at her fallen opponent.