Rome cracks down on marauding centurions

Rome has given the centurions a deadline to clear out. The solders in question aren't from the ranks of an ancient legion, but are modern-day performers who pose for tourist photos at the Colosseum.

Men and women decked out in chest plates and helmets eke out a tax-free living at Rome’s most popular attraction, posing for photos with foreign visitors for 5 or 10 euros. Disoriented, jet lagged, or simply scared, tourists have been known to pay up to 50 euros ($67). Some have been roughed up when they refuse. 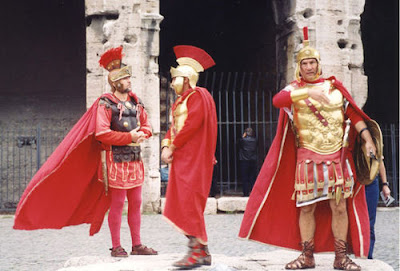 Arrests were made last summer in an undercover operation with police in tunics and sandals handcuffing centurions and gladiators for ripping off tourists. A recent Italian media report cited a policeman as saying the centurions are all ex-convicts, “every last one of them.”

Now the city government says “basta!” and wants them to pack up their swords, shields, and ensigns and clear out by April 6.

Click here to read this article from the Christian Science Monitor