Lust, Lies And Empire: The Fishy Tale Behind Eating Fish On Friday 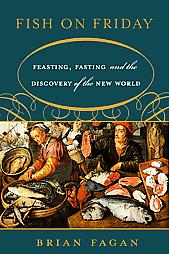 It sounds like the plot of a Dan Brown thriller: A powerful medieval pope makes a secret pact to prop up the fishing industry that ultimately alters global economics. The result: Millions of Catholics around the world end up eating fish on Fridays as part of a religious observance.

This "realpolitik" explanation of why Catholics eat fish on Friday has circulated for so long, many people grew up believing it as fact. Some, myself included, even learned it in Catholic school. It's a humdinger of a tale — the kind conspiracy theorists can really sink their teeth into. But is it true?

"Many people have searched the Vatican archives on this, but they have found nothing," says Brian Fagan, a professor emeritus of archaeology at the University of California, Santa Barbara, whose book, Fish On Friday, explores the impact of this practice on Western culture.

The real story behind fish on Fridays turns out to be much better.