The Jews had significant competition in antiquity when it came to worshipping Yahweh. Archeologists have discovered a second great temple not far from Jerusalem that predates its better known cousin. It belonged to the Samaritans, and may have been edited out of the Bible once the rivalry had been decided. 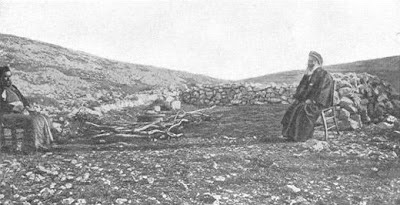 Clad in gray coat, Aharon ben Ab-Chisda ben Yaacob, 85, is sitting in the dim light of his house. He strikes up a throaty chant, a litany in ancient Hebrew. He has a full beard and is wearing a red kippah on his head.

The man is a high priest -- and his family tree goes back 132 generations. He says: "I am a direct descendent of Aaron, the brother of the prophet Moses" -- who lived perhaps over 3,000 years ago.
Ab-Chisda is the spiritual leader of the Samaritans, a sect that is so strict that its members are not even allowed to turn on the heat on the Sabbath. They never eat shrimp and only marry among themselves. Their women are said to be so impure during menstruation that they are secluded in special rooms for seven days.


Click here to read this article from Der Spiegel