Some of the most important papyri on magic in the world are housed at the University of Oslo. Papyri show that though we tend to associate Antiquity with rationality and science, it was also characterised by several alien and obscure practices.


"Papyri are the closest we get to the people of the Antiquity. Nowhere else do they emerge so vividly; people wrote down texts and recorded important life events on rolls and fragments of papyrus. When we study these fragments today, we get a direct view of everyday life in Egypt under Greek, and later Roman, rule", says Anastasia Maravela. The papyri in the University of Oslo Library collection are very diverse and include private letters, horoscopes, dinner invitations, culinary and medical recipes, school texts, marriage and divorce papers, arrest orders for tax evaders, accounts, death notices, fragments of literature, and an entire roll of magic formulas. 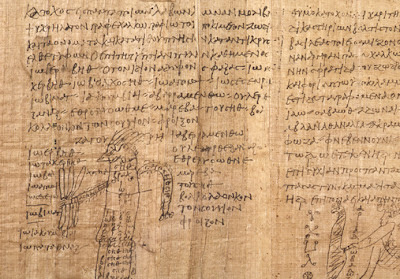 Maravela is Associate Professor in Ancient Greek, and is the first UiO scholar in many years to research papyri.

"UiO papyrologists were once considered among the best in the world. We are renewing that tradition, and have re-established UiO as an important centre for research on papyri from Egypt, with a great deal of important texts that have not yet been studied", she remarks.

UiO has the largest papyrus collection north of Berlin. The collection consists of nearly 2300 papyrus fragments, in addition to 27 ostracka (inscribed potsherds), some parchments, some text on mummy labels and one mummy-shroud.

How did so many papyri end up in Oslo? How did the academic papyrus research community become so strong in Oslo?


Click here to read this article from the University of Oslo