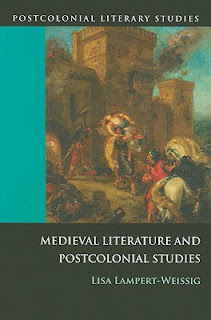 Lisa Lampert-Weissig, author and professor from the University of California, San Diego, held a lecture titled “Reading the Palimpsest of Race: Medieval Traces in Modern Discourse” in Swan Hall yesterday she discussed the issues highlighted in her latest book, Medieval Literature and Postcolonial Studies.

In her work, she connected medieval subject matters, such as post-colonialism studies and orientalism, to contemporary problems in today’s society, including Islamophobia and racial profiling. According to her body of work, in order to think about current issues regarding race in an intelligent and political way, it is important to also think about how these subject matters were handled in medieval literature and culture. This is because history is a palimpsest, said Lampert-Weissig, and it is something that is meant to be read.

“A palimpsest is a writing material, such as a parchment or tablet, used one or more times after an earlier writing has been erased,” Lampert-Weissig said, quoting Merriam-Webster Dictionary. “It is also something that has diverse aspects or layers beneath the surface. History can be a palimpsest of place, and it can relate to a person’s identity.”