Weapons maker to the world: Meet the go-to man for battle attire 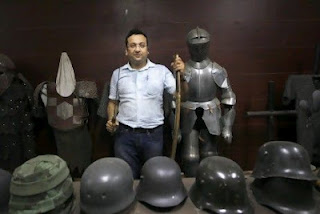 On the outskirts of New Delhi, in a cramped concrete workshop where the air shimmers with the light of welding torches, an Indian businessman has become a master craftsman of Napoleonic swords. And medieval chain-mail armour. And Second World War hand grenades and helmets.

From Hollywood war movies to Japanese Samurai films to battle re-enactments across Europe, Ashok Rai, 31, is one of the world's go-to men for historic weapons and battle attire.

Rai's workshop reverberates with the sounds of metal being hammered and beaten into chain mail, swords, axes, muskets, sabres, spears and helmets.

Rai, a trap-shooting enthusiast, says he has been a history buff since childhood. "I would watch every war movie that came to town. All my life, I've been reading up on all the major battles in history. Now when we make medieval battle gear it's easy for me to explain to my craftsmen exactly what's to be done."

Click here to read this article from the Associated Press