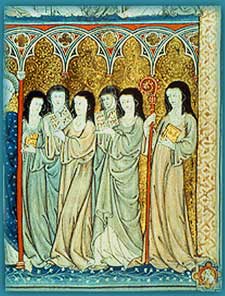 They were held up as paragons of virtue, but one congregation of Essex nuns appear to have needed some pointers on how to conduct themselves.

In a book of advice for the cloistered women written more than 1,300 years ago, they were reminded of the benefits of virginity, warned of the sin of pride, and cautioned against wearing garments which “set off” the body.

The guidance came from the Anglo-Saxon cleric Aldhelm in a text dedicated to the abbess nuns of Barking Abbey, the oldest surviving version of which is now up for sale. In the work, De Laude Virginitatis [In Praise of Virginity], the author tells the nuns that abstinence from sex is not enough - their “stainlessness of bodily virginity” must be accompanied by a “chastity of the spirit” if they are to avoid the “untamed impulses of bodily wantonness”.

Addressing the issue of clothing, he writes: “If you dress yourself sumptuously and go out in public so as to attract notice, if you rivet the eyes of young men to you and draw the sighs of adolescents after you, and nourish the fires of sexual anticipation ... you cannot be excused as if you were of a chaste and modest mind.”