Statues of entertainers have been unearthed during the third excavation of the Mausoleum of Qin Shi Huang, China's first emperor of the Qin Dynasty (221 BC-206 BC) in northwest China's Shaanxi Province.

The statues were found in a pit numbered K9901. With an area of 800 square meters, the pit is located in the southeast corner between the walls of the inner part and the outer part of the mausoleum.

Up to now, archaeologists have found the relics of more than 30 life-size statues in the pit and successfully restored six of them.

Most of the statues in K9901 Pit are shirtless and have "beer bellies" and bare feet.

Archeologists estimated that they were statues of entertainers or acrobats in the imperial palace as acrobatics was rather popular during the Qin Dynasty according to historical records. Also found were several giant statues with their heights reaching more than two meters. 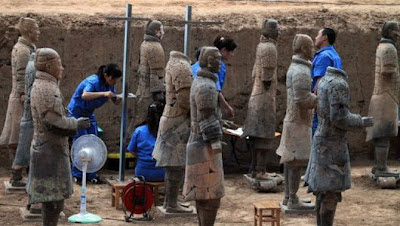 
Chinese archaeologists have unearthed 110 new terracotta warriors that laid buried for centuries, an official said Monday, part of the famed army built to guard the tomb of China’s first emperor.

The life-size figures were excavated near the Qin Emperor’s mausoleum in China’s northern Xi’an city over the course of three years, and archaeologists also uncovered 12 pottery horses, parts of chariots, weapons and tools.

“The... excavation on the 200-square-metre (2,152-square-feet) site has found a total of 110 terracotta figurines,” Shen Maosheng from the Qin Shihuang Terracotta Warriors and Horses Museum -- which oversees the tomb -- told AFP.