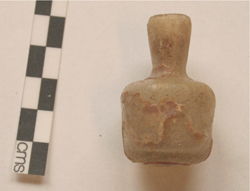 Could Cleopatra have used these ancient glass bottles? Were these 3,000 year old figures ‘servants’ in the afterlife? Questions which excited staff at Swansea University Egypt Centre are hoping to solve when they study a valuable collection of over 30 ancient Egyptian objects which has travelled from Surrey to Swansea, and arrived at the centre today.

The artefacts, donated by Woking College, includes two glass bottles (perhaps for scent or make-up) from late in Egyptian history (c100BC-AD200), around the time of Cleopatra and several shabtis (servant figurines) which the ancient Egyptians believed would do work for their deceased owners in the afterlife. One of the shabtis is an ‘overseer shabti’. Shabtis, mirroring real life work teams, were organised in gangs of 10. Each gang would be overseen by a foreman, or overseer. The shabtis are around 3,000 years old.

Other objects include amulets, including an amulet of Sekhmet (a fiery, female goddess with a feline head) and another amulet of Shu (who separated heaven and earth); a head of the god Bes (protector of children and women in childbirth); a pendant in the shape of a lotus or papyrus sceptre; several pottery vessels and a Sokar hawk (Sokar was a god associated with rebirth).

Click here to read this article from Swansea University