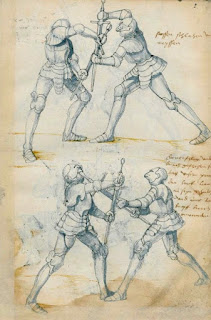 For most people, martial arts are inexplicably tied to the Far East. However, as special guest author John Clement of the Association For Renaissance Martial Arts details below, a sophisticated science of self-defense was prevalent in the west during Medieval and Renaissance times:

With the evolution of the armored knight as the consummate professional lone warrior, an indigenous art of personal combat developed to an exceptional degree in Western Europe. Once guarded as secret skills, from the early-1300s to mid-1600s these long forgotten chivalric fighting traditions were practiced as a highly effective and systematic “science of defence.”

Click here to read this article from A Blog about History