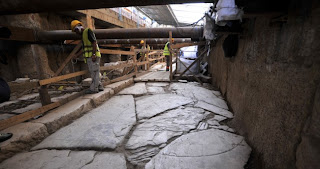 Archaeologists in Greece’s second-largest city have uncovered a 70-metre section of an ancient road built by the Romans that was the city’s main travel artery nearly 2,000 years ago.

The marble-paved road was unearthed during excavations for Thessaloniki’s new subway system, which is due to be completed in four years. The road in the northern port city will be raised to be put on permanent display when the metro opens in 2016.

The excavation site was shown to the public on Monday, when details of the permanent display project were also announced. Several of the large marble paving stones were etched with children’s board games, while others were marked by horse-drawn cart wheels.

Also discovered at the site were remains of tools and lamps, as well as the bases of marble columns.