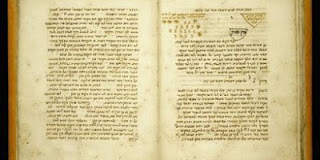 It is a story which out-Dan-Browns Dan Brown, a tale of Italian mediaeval courts, spies, intrigue, and, at its heart, an extraordinary Jewish scholar, Abraham Ben Mordecai Farissol.

Farissol, who lived between 1469 and 1528, was the author of a remarkable manuscript, Iggeret Orhot Olam, or Treatise on the Ways of the World. On July 10, Sotheby's in London is selling Farissol's work, the only one in private hands, and famous as the first Hebrew manuscript to mention America and the possibility of Native Americans being one of the lost tribes of Israel.

Dr Timothy Bolton, Sotheby's specialist in mediaeval manuscripts, can barely contain his excitement about the manuscript, probably written in 1524. There are only five known copies of the Farissol manuscript - one in Oxford, one in Budapest, one in Parma and one in Florence - but the Sotheby's example is the only one which scholars say carries a delicious "extra" - a sketch of America, almost certainly added to the manuscript by Farissol himself, after the scribe Joseph ben Abraham Finzi Delinyago presented him with the finished version.