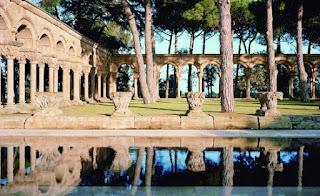 Could a poolside folly at a private Mediterranean resort in Spain owned by a reclusive German billionaire actually be a 12th century architectural treasure spirited away from its original home?

This is the historical mystery being unraveled by a medieval art expert who has been investigating a cloister that has stood since 1958 on a northeastern Spanish estate owned by wealthy German philanthropist Curt Engelhorn and his family.

Gerona University Medieval Art History Professor Gerardo Boto believes the cloister, now nestled in a pine forest on the estate in Palamos, some 120 km north of Barcelona in the northeastern Spanish region of Catalonia, could be the remains of a romanesque monastery that was originally built several hundred miles away in the central region of Castilla y León.

"If its authenticity is confirmed, that could help us rewrite a few aspects about Spanish romanesque," Boto told Reuters on his first visit to the cloister.


Click here to read Who has a cloister around their pool?