Should We Rebuild the Buddhas of Bamiyan?

When you've spent 18 months writing a book called The Buddhas of Bamiyan, and - let's be honest - when you'd quite like to flog a copy or two, all the recent talk about reconstructing one of the colossal statues demolished by the Taliban can seem heaven-sent. Those 18 months were spent discovering that places don't come any more historically significant than Bamiyan. 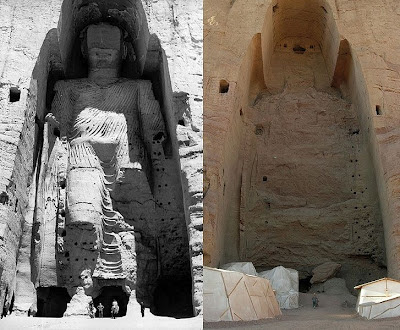 In AD 629 the Buddhas were visited by Xuanzang, the great Chinese traveller sometimes described as the Marco Polo of the East: he left a precious account of their original, brightly-coloured decoration. Later they were celebrated wonders of the Islamic world, monuments of which it was said that there were "no equals in this world."

At the end of the 18th century an eccentric but influential British author proposed that Bamiyan was the Garden of Eden: a string of dropouts, spies, and Christian missionaries visited Bamiyan from British India in his wake, and though all of them found a place of breathtaking natural beauty, the earthly paradise proved more elusive. Even the destruction of the Buddhas in 2001 was connected in murky ways to the greatest historical turning-point of recent times, in New York later the same year.

So yes, by all means let's investigate the feasibility of reconstructing the smaller (38 m.) Buddha - what remains of the bigger (55 m.) statue is just too fragmentary for it to be an option there. If it can be done well, if the daunting technical obstacles can be overcome, and if the cost (which will be exorbitant) can be justified by the benefits it will bring to a renascent tourist industry, who could possibly object? It's certainly what the local population want, and leaving empty the niche of the larger Buddha would even satisfy the purists who see the space where the Buddhas once were as a powerful memorial in itself. In all sorts of ways, a profoundly apt gesture.