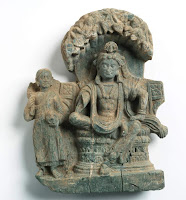 In the ruins of a Buddhist monastery in Afghanistan, archaeologists have uncovered a stone statue that seems to depict the prince Siddhartha before he founded Buddhism.

The stone statue, or stele, was discovered at the Mes Aynak site in a ruined monastery in 2010, but it wasn't until now that it was analyzed and described. Gérard Fussman, a professor at the Collège de France in Paris, details his study in "The Early Iconography of Avalokitesvara" (Collège de France, 2012).

Standing 11 inches (28 centimeters) high and carved from schist — a stone not found in the area — the stele depicts a prince alongside a monk. Based on a bronze coin found nearby, Fussman estimates the statue dates back at least 1,600 years. Siddhartha lived 25 centuries ago.