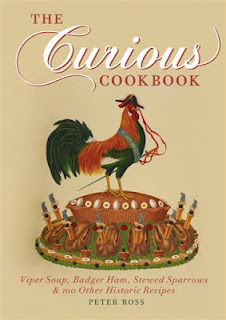 Adventurous cooks might consider one of the recipes in Peter Ross's new book, but the author of the tome on unusual historical cuisine says it's probably best not to try a dish featuring animals like swans, peacocks or porpoises.

"You could cook a meal, but it could be quite a strange meal," said Ross, the chief librarian at Guildhall Library in London and the author of The Curious Cookbook, which looks at a wild range of cookery from medieval times right through to the Second World War.

"It's mostly the medieval recipes where you're going to have a problem — because they were eating things like swans, peacocks, porpoises."

The new book also features a live frog pie that dates from the 17th century.

Ross said the dish containing live frogs was "basically an entertainment" that was served during a high-class meal.