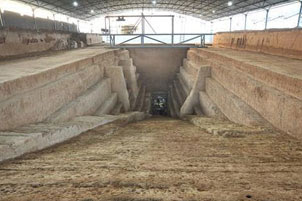 The grave of Cao Cao (AD 155-220), the founder of Wei Kingdom - the strongest and most prosperous state during the Three Kingdoms period, was discovered in Anyang City in central China's Henan Province, archaeologists announced Sunday in Beijing.

According to Chen Ailan, director of the Henan cultural heritage administration, the discovered tomb, close to the former site of Wei's capital Luoyang, was confirmed as Cao Cao's.

A stone tablet discovered at the scene said it belonged to the king of Wei, and the remains in the tomb were determined to be of a man in his 60s. Cao Cao died at 65. The remains of two women were also found in the tomb. The first was in her 50s, and may have been an empress, while the other was about 25, and likely a servant.

More than 250 articles, including gold, silver, and pottery, were unearthed from the 740-square-meter tomb, a size appropriate for a king. Archaeologists also found 59 engraved stone plates logging the name and amount of the articles buried in the tomb. Seven of the plates logged weapons "often used by the king of Wei." Also unearthed were a large amount of paintings drawn on stone plates, as well as a sword and scabbard.

Cao Cao wrote in his will that his burial place should be simple, which corresponds to the fact that the walls of the tome were not painted and few precious articles were found, said Hao Benxing, head of Henan's Institute of Archaeology.

Although further excavations are yet to be carried out, current evidences are adequate to prove this is Cao Cao's tomb, said Guan Qiang, director of the archaeology department of China's State Administration of Cultural Heritage.

The tomb had been raided for several times before archaeologists started to excavate it in December 2008, Guan said. The police are working to retrieve the stolen articles, he added.

Tablets carrying the inscription "King Wu of Wei," Cao's posthumous title, were seized from people who had apparently stolen them from the tomb.

The governments of Henan and Anyang are planning to display the tomb to the public, Hao said. 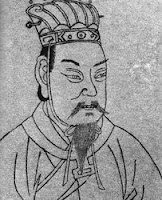 In the late second century, Cao Cao emerged as one of the main warlords in China as the Han Dynasty crumbled. He built up the state of Wei in northern China and successfully defeated several rivals. Soon after his death in 220, his son Cao Pi formally removed the last Han emperor from the throne and started the Wei Dynasty.

In literature and legend Cao Cao is depicted as a ruthless and Machiavellian statesmen, who was said, "to be able enough to rule the world, but evil enough to destroy it." He is one of main characters in the famous 14th century novel, Romance of the Three Kingdoms.

Cao Cao is also famous for the poetry he wrote, some of which has survived, and for his military treatise.