James III, king of Scotland from 1460 to 1488, endured a turbulent reign. Having survived war with England and rebellions by Scotland’s nobles (including his own brothers) he was eventually killed in the battle of Sauchieburn on 11 June 1488, during another rebellion: this one supported by his eldest son. The manner of his death gave rise to one of the earliest recorded conspiracy theories.

By the 16th century there were claims that James, while fleeing from the battle, had been murdered by an assassin disguised as a priest at Milltown, near Bannockburn, although another version of the story has James being thrown by a horse during the battle, either being killed by the fall or by enemy soldiers.

Now medieval documents reveal that the Scottish Parliament tried to cover up the slaying of the unpopular king.

James III became King of Scots at the age of just nine, in 1460, but his unwillingness to administer justice fairly and a policy of pursuing an English alliance caused him to be intensely disliked by his subjects.

By the early 1480s, the king was estranged from his wife, Margaret of Denmark, and was increasingly becoming alienated from eldest son by favouring James Stewart.

His problems escalated and on June 11, 1488, he faced an army raised by disaffected nobles and led by his 15-year-old son James IV, provoked by the favouritism to his younger brother.

The new documents, including an extract from the Register of the Parliament of Scotland from October 1488, show how James IV wanted to end speculation surrounding his father's death.

Parliament exonerated the new king, stating that 'oure soverane lord that now is and the trew lordis and barouns that wes withe him in the samyne feild war innocent, quhyt and fre of the saidis slauchteris feilde'.

Dr Alan Borthwick, head of medieval records section in the National Archives of Scotland, said, "It's clear from events in the following months that opinions were more divided than the record implies.

"Modern journalists would have loved this story: a king dies in battle against forces led by his own eldest son and heir. But if anyone knew who actually killed the king they kept quiet about it.

"Then the new government seemed more concerned with finding where the dead king's jewels and treasure were than in tracking down the assassin." 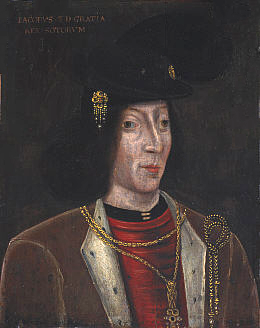 Public dissatisfaction with the event and the parliamentary debate was followed by open rebellion. As late as 1492, the government had to offer a reward of 100 merks' worth of land for the arrest of his killers. The reward has never been claimed.

The text from the official records of parliament is one of the exhibits in 'An Open Secret': an exhibition at the National Archives of Scotland in Edinburgh. The exhibition shows changes in government attitudes to record and information closures. Using images of records from the 15th century to the 20th century, it shows how successive governments initially sought to keep information secret and from the public gaze, while later recognising the need to satisfy increasing public demand for freer access.

Click here to read an extract from the register of the Parliament of Scotland, 17 October 1488: Enquiry into the Battle of Sauchieburn and the articles of Aberdeen