An accurate model replica of one of the most precious medieval maritime finds of recent times in Wales will soon be complete - thanks to an innovative manufacturing process perfected at Cardiff University.

The Newport Medieval Ship, which dates back to the 15th century, was discovered in the banks of the River Usk in June 2002. Excavated by a team of archaeologists and lifted from the ground timber by timber, international specialists have been cleaning and digitally recording all 1700 ship timbers for the last six years to produce a digital record of the ship's structural elements, specifically the hull.

These three-dimensional digital recordings are now being used by Cardiff University's Manufacturing Engineering Centre (MEC) to build an accurate virtual solid model of each timber, as part of a four-year project to reconstruct the ship’s original hull.

The ShipShape project is being led by the University of Wales Lampeter in conjunction with Newport City Council, and is funded by the Arts and Humanities Research Council. The project will see the Ship produced in a precise 1:10 scale model format, using the timbers and MEC’s Selective Laser Sintering expertise.

Selective Laser Sintering is a fast process using laser beams to selectively melt successive layers of fine plastic dust. Wherever the lasers are directed, the plastic dust is melted. When the lasers are switched off, the powder remains unmelted, and creates a void. This will allow the archaeologists to accurately model all of the major fastener holes on the ship timbers.

Nigel Nayling, principal investigator at University of Wales Lampeter said: “The ship remains have been distorted over centuries of burial and the original size and shape of the vessel cannot be readily determined. Traditional approaches to the research question of what the vessel would have looked like have included the construction of scale research models in fragile materials such as card, which are not suitable. We needed to identify a technology which would develop a more robust end product, and one which would deliver much more accurate and detailed results.

“We commissioned the expertise and excellent R&D capabilities at the Manufacturing Engineering Centre as we were confident that they had the ability to come up with a solution to our exacting requirements. Using the SLS technology at MEC, what we will end up with is an incredibly flexible scale model allowing the archaeologists to gently reshape the hull.”

Geraint Evans, Business Manager at MEC, said: “Selective Laser Sintering technology has the ability to easily make very complex geometries directly from digital CAD data. With the use of this technology we are able to produce scaled models of the ship, including all the bolt holes and fastenings for Nigel and his team to reconstruct accurately.”

Toby N. Jones, Curator for the Newport Medieval Ship Project, said: “The laser-sintered model will help members of the public understand the immense size of the vessel as well as understand some of the complex construction details.”

Upon completion, the model will serve as a three-dimensional blueprint on which to base the eventual reassembly and display of the vessel. It will measure nearly 3.5 meters in length and 0.8 meters in width, and will be on display for the public. 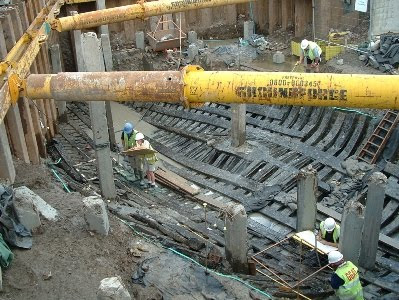 The ship was originally around 80 feet (25 metres) long, making it quite capable of continental voyages. Although there were no initial plans to preserve the ship in its entirety, local people campaigned eagerly to ensure this. Initial estimates suggested that preservation would cost about £3.5 million and this sum was eventually found by the Welsh Assembly Government and Newport City Council. All of the ship's timbers have subsequently been raised and transferred to a dedicated industrial unit which the local council describes as "now the biggest wood conservation centre in the UK", where preservation and research continue. Due to its size, it has not been possible to display the ship in the basement of the new arts centre, as was originally proposed.

Artefacts found in the ship suggest that it was trading with Portugal in the fifteenth century. The abundance of artefacts linked with Portugal argues even that the ship was also built there. Dendrochronology has given a likely felling date of 1465 and 1466 for some of the timbers used in both its construction and its repair. Remnants of a cradle found beneath the ship suggested that it had been berthed for repair but then abandoned.