The remains of one of Medieval Spain's most celebrated monarchs were discovered last week by a team of archeologists at the Santa Maria de Santes Creus monastery in Tarragona.

Pere el Gran (in English Peter the Great) (1240-1285), ruled the Kingdom of Aragon as Pere III, Valencia as Pere I, and Barcelona as Pere II, as well as Sicily. During his reign, Pere consolidated the gains his father, Jaume I (James the Conqueror), had secured for the crown, put down Moorish rebellions and repulsed a French army led by Phillip III.

The discovery of the remains of Pere el Gran, embalmed and remarkably well preserved in a stone sarcophagus, will allow investigators to determine his physical characteristics and the cause of his demise, as well as validating the remains of his father, interred in another monastery in Poblet with two skulls of similar dimensions. Pere's body was found covered by a fabric with a helmet on his head. Researchers will analyze the DNA of Pere to determine his physical and genetic characteristic as well as his diet.

Engineers have entered the sarcophagus of the Aragonese ruler through the introduction therein of a camera, a non-intrusive system that has produced the first images of the skull of the king. Click here to see video from this examination. 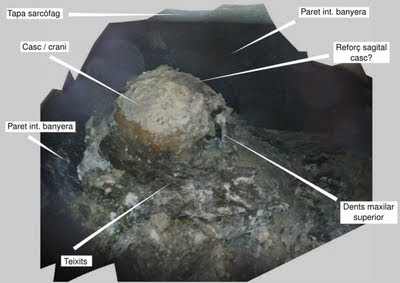 Pere III was the first monarch of the Crown of Aragon to be buried in the monastery of Santes Creus and through the European rite, which involved embalming the body and has preserved almost untouched king's mummy. The work also confirmed that the body was buried with abundant floral aromatic substances, how they used to be at the time.

His death was celebrated with the first royal funeral held in the Monastery of Santes Creus, twelfth-century Cistercian Abbey which is one of the jewels of medieval buildings in Catalonia. Besides the tomb of Pere the monastery also contains the remains of his son, Jaume II, and the latter's wife, Blanche d'Anjou.