A new article on homicides in the medieval London suggests that the homicide rate was relatively low, and was lower than the rates for other English counties from the time.  The conclusion comes from the article, "Peacekeepers and Lawbreakers in London, 1276-1321," by Henry Summerson, which has been published in the latest volume of Thirteenth Century England.

Summerson examines the roll of crown pleas from the London Eyre of 1321, which detail various criminal events in England, including homicides from 1276 to that year.  During that 44-year period, the author finds that 674 deaths that were likely murders that took place in London.

The medieval records often give lurid details of these crimes, such as when two men take a prostitute to a latrine and then get in argument over who gets to have her first. The argument leads to one man striking the other dead.  In another case, a chaplain persuades a young man to grant him sexual favours in the church of All Saints Barking, and then while sodomising him with a stick, inflicts a mortal injury.

The most serious crime took place on June 16, 1298, when 144 people were killed near St. Paul's Cathedral, after a group of sixteen armed men attacked a crowd of  paupers - the people either were killed as the bandits cut down them while robbing them, or were crushed and trampled in the panic to escape. 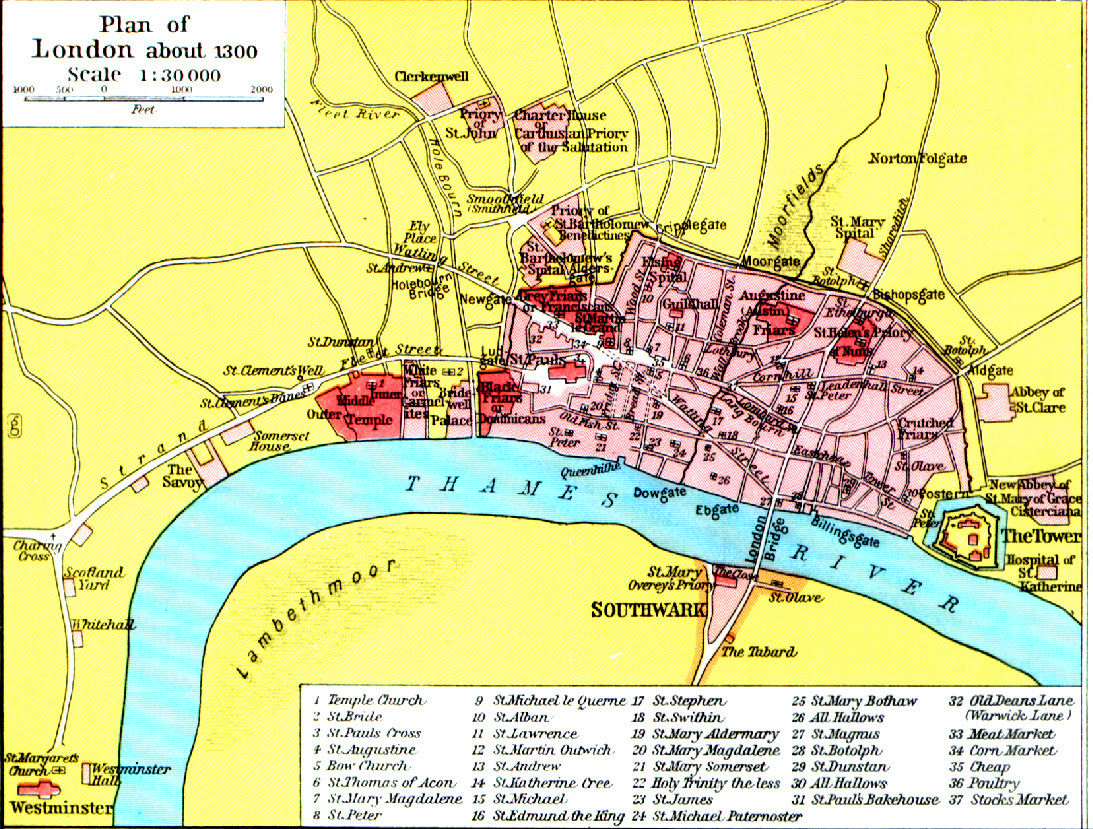 But Summerson finds that despite these incidents, the homicide rate averaged only about 15 murders a year, which he finds low, especially compared with other English counties. For example, Essex averaged 25 murders a year between 1272 and 1285, while Devon had close to 37 homicides on average between 1268 and 1281.

The author attributes the low homicide rate to a variety of factors, including the involvement of civic authorities, namely the Mayor and Aldermen of London, in enacting and enforcing laws to keep the peace. Laws against the carrying of weapons, or being out at night, were frequently issued.  Meanwhile, an early form of a police force had developed in London, where the Sheriff of London could have a permanent force to assist him in finding and apprehending criminals. By 1319 there were twelve serjeants working in London.

Summerson adds that other institutions, such as the church and the local guilds, probably also played a role in peacekeeping throughout the city.  He concludes that Londoners had a "fair degree of success" in keeping violent crime under control.

The study finds that most of the people suspected or convicted of homicides in London were poor - of the 850 felons named in the eyre, 668 were said to have no chattels. Summerson adds, "Paupers and vagrants could be found anywhere, but the geographical pattern of London homicide shows that it was most frequent where poor people were likeliest to be found, in three wards in the north-west suburbs extending well outside the city walls - Aldersgate, Farringdon and Cripplegate - and in some of the wards fronting the Thames, where cheap labour was in demand on the wharves and the presence of sailors probably had an additional destabilising effect."

Summerson also notes that "Londoners were no more successful than anyone else when it came to arresting suspects and convicting those that were caught." 750 of those accused of a homicide escaped arrest, while a further 112 were acquitted or pardoned. Only 104 men and women described as killers were convicted and hanged, or died in prison.