Article examines the Dress Accessories of Medieval Peasants in England 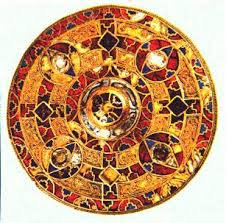 A study on medieval peasants in England shows that what clothes and dress accessories were important to them and that were resisting attempts by the English elite to force them to dress in humble garments.

Sally V. Smith's article, "Materializing Resistant Identities among the Medieval Peasanty," examines several archaelogical finds from rural villages throughout England, such as Wharram Percy and Bolton. Smith looks at the dress accessories that have been found at these sites, including the burial places, such as buckles, brooches and pins.

The research finds that were few of these items were made of poor quality metal, with most made of copper or iron, and even one item made from gold. Smith writes, "that medieval peasants were not choosing items made using the ‘worst’ or cheapest material available."

Secondly, over half of the objects were either decorated or were purely decorative in function. This is at odds with pictoral evidence about English peasants, where they are depicted as wearing very simple and bland clothes without decoration. These can be found in illustrations in the manuscripts like the Luttrell Psalter and in the stained-glass images found in churches.

Smith concludes that "in purchasing and wearing these items, which would have been highly visible on peasant clothing, the peasants were resisting the imposition of an identity that only represented their bodies as humble, servile and labouring."

She also points to several pieces of evidence to show how important dress was in medieval England, and how authorities tried to regulate what certain people wore. Church officials also stressed the people not wear fancy clothing.

Several medieval writers complained about the dress of women. For example, the chronicler
John of Reading, reporting on a later outbreak of the disease in 1365, blamed it in part on "the empty headedness of the English who remained wedded to a crazy range of outlandish clothing . . . They began to wear useless little hoods [and] extremely short garments which failed to conceal their arses or their private parts . . . these misshapen and tight clothes did not allow them to kneel to God or the saints."

The article, "Materializing Resistant Identities among the Medieval Peasanty," can be found in the Journal of Material Culture, Volume 14:3 (2009).