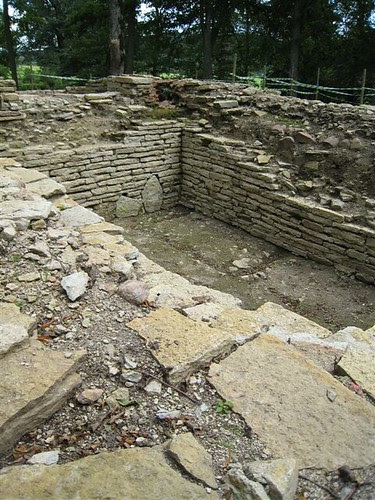 An archaeological project in Sweden has turned up evidence of Christianity in the area going as far back as the ninth century as well as the remains of the oldest known church in that country.

The project was started in 2005 and focused on investigating the traces left by the people who lived in Varnhem before the Cistercian monastery took over the site in the middle of the twelfth century. The results led to a new insight into when and how Christianity became established in south-west Sweden.

Varnhem seems to have had continuous settlement from the third century BC until the middle of the twelfth century AD. Some pagan burial grounds were found in the area.

The first church built on this site was a small wooden building raised around 1000. After some decades, this was replaced by a larger wooden church with a stone cellar under the nave in the west. The stone cellar’s walls are approximately 2 meters high and well preserved. They are the oldest known dated stone walls in Scandinavia north of Denmark.

The church includes a tomb made of limestone, with a female skeleton dating to around 975 AD. The archaeologists found that the church was expanded on several occasions, replacing wooden walls with stone, until it reached a size of 15 meters by 8 meters.

The authors state that the building of churches in that part of Sweden became popular in the twelfth century, adding that having a church, preferably with stone walls, "must have been the ultimate status symbol in eleventh-century Scandinavia."

The archaeologists discovered runestones on engraved on tombstones in the churchyard. One of them says, "Kättil erected this stone in memory of his wife, Kata, Torgil’s sister."

Around the church, there is a large Christian burial site with at least two thousand graves, with the females buried on the northern side and males on the southern. This was a common practice in Scandinavia during the Middle Ages.

"The dating of the graves is particularly interesting," the autors write. "It shows that the burial site was used for Christian interments continually from the late ninth century to the late twelfth century, that is, a period of something between 250 and 300 years. A score of human skeletons have been dated so far. Of these, ten date from before AD 1000, with the oldest being from the late ninth century. There is thus clear evidence of Christianity being firmly established in these tracts by at least AD 900, that is, roughly one hundred years earlier than previously considered."

Research on the remains have only just begun, but some have already been found with grave-goods, including knives, coins, buckles and individual glass beads. One male was found with a miniature stone altar, which may indicate that he was a priest or religious official.

The authors conclude, "The investigations in Varnhem will now be part of the debate on whether, and to what extent, Christianization was a process that grew from the lower class of society or one that began with the upper class adopting Christian practices."

The property where the church was found was donated to the Cistercians in the 1150s, where they established Varnhem Abbey, one of the largest and most powerful in Scandinavia.

The article, "The Varnhem Archaeological Research Project: A New Insight into the Christianization of Vastergotland" by Maria Vretemark and Tony Axelsson, appears in Viking and Medieval Scandinavia, Volume 4 (2008).