Arab coin dating back to the year 805 found in Norway 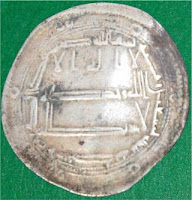 Archaeologists in Norway say an ancient Islamic coin dating back to 805 AD was found just west of Oslo earlier this year. Houshang Khazaei, who is a researcher at the University of Oslo, said that the coin is an issue of Abbasid Caliph Harun al-Rashid, who ruled from 786 and 809 A.D.

The coin is a silver dirhem of about three grams weight. It was minted at Mohammadiyyah in 805 A.D. in what is today Iran.

Arab coins have been found before in Norway, but these are typically dated beginning in about 1000 to 1200 A.D. Last year, a hoard of 472 Arabic coins dating from a burial site estimated to date from about 850 A.D. that were recently discovered on the Swedish island of Gotland in the Baltic Sea. The coins in the Swedish find were said to have been minted primarily at Baghdad or Damascus, with some coins originating in Persia and North Africa. The names of the mints in Persia that may have been involved were not immediately announced, but could possibly have included Mohammadiyyah.

The reign of Harun al-Rashid was marked by prosperity, particularly in the areas of culture, religion and science. Trade and diplomatic contacts were carried out between the Abbasids and European rulers during this period.

Gold rather than silver coins dominated Eastern Europe and the Abbasid caliphate during this period, while the few coins struck in medieval Western Europe were primarily silver. To illustrate the extent to which coins were still used in the east during this period, in 806 A.D. al-Rashid forced the Byzantine Empire to pay him 50,000 gold coins immediately, to be followed annually by an additional 30,000 pieces as tribute.

Silver dirhem coins were minted throughout North Africa and the Middle East during this time. Since coins were typically traded based on their metal content and weight, dirhems often functioned as an international trade coin, regardless of where the individual coin may have originated. It is likely that the coin recently found on the Hurum peninsula in Norway was brought there by Viking traders.