It drew huge attention, from the New York Times on down, after French investors purchased property in Boone County, between Lead Hill and Omaha, to recreate a medieval fortress using authentic construction methods, from stone masonry to forging of metal fittings. It opened in May 2010. The idea, based on a similar attraction in France, was to attract paying visitors ($18 for adults in the last season) to watch and learn about the construction, which was said to take 20 years to complete. It was named one of the state's top 10 tourist attractions. 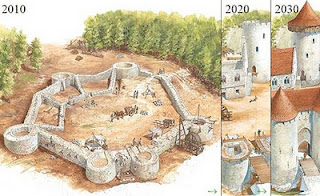 Things apparently haven't run exactly according to plan. Though a call to the phone says the fortress will reopen for the tourist season in April, the website says it won't reopen in 2012 and no reservations are being taken. I've been unable to reach any of the French leaders of the project, but Arkansas Tourism Director Joe David Rice said he'd learned the attraction wouldn't be opening this year. Agencies that have advertised the attraction in the past are making plans not to include it in advertising brochures this year.

Click here to read this article from the Arkansas Times