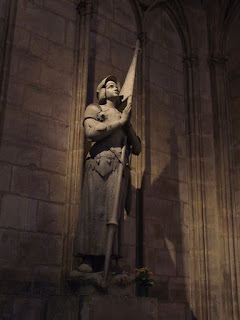 Joan of Arc was born 600 years ago. Six centuries is a long time to continue to mark the birth of a girl who, according to her family and friends, knew little more than spinning and watching over her father’s flocks. But type her name into Amazon’s search engine and you get more than 6,000 results. France’s national archives include tens of thousands of volumes about her. She has been immortalized by Shakespeare, Voltaire, Twain, Shaw, Brecht, Verdi, Tchaikovsky and Rubens; more recently, her life was fodder for the CBS television series “Joan of Arcadia.”

What is it about Joan of Arc? Why is her story of enduring interest more than a half a millennium after her birth?

By the time Joan of Arc was 16 and had proclaimed herself the virgin warrior sent by God to deliver France from her enemies, the English, she had been receiving the counsel of angels for three years. Until then, the voices she said she heard, speaking from over her right shoulder and accompanied by a great light, had been hers alone, a rapturous secret.