Book Review: 1494: How a Family Feud in Medieval Spain Divided the World in Half 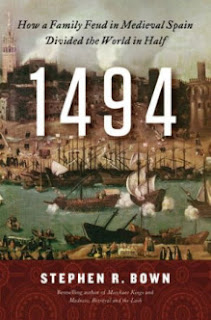 In one of cinema’s most beloved scenes, Charlie Chaplin’s Great Dictator plays in his office with a beachball-sized balloon representing the globe – and his own insane pretension. The game and the sentiment were not, alas, unprecedented.

In 1493, the voluptuary Pope Alexander VI (fans of Bravo’s The Borgias know how wholly unholy His Holiness was), sat down at his desk and traced a line on a map of the Atlantic Ocean. He was carving up the world, unilaterally.

The following year, intent on tweaking the papal cartography, envoys of Spain and Portugal met in the dusty Castilian town of Tordesillas and agreed on a division of the world between them – and them alone. Thus was born the far-reaching Treaty of Tordesillas of 1494, a Renaissance beachball bounced about by the squabbling ruling families of Iberia.

And when the “known” world had expanded in the generation following the treaty’s signing, the usual suspects met up again, in the Spanish border town of Badajoz, this time to divvy up the Pacific Ocean. A young boy, of a temperament worthy of Chaplin’s, is said to have greeted the haughty Portuguese delegation on a bridge by mooning them and saying, “Draw your line right through this!”