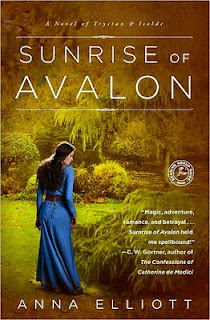 Anna Elliott is well versed in the lore and legends of the Dark Ages.

“Sunrise of Avalon,” the final book in the historical fiction and fantasy novelist’s Twilight of Avalon trilogy, was released in September. Elliott of University Park studied English and medieval history in college and has long been a devoted fan of the Victorian novel.

“I wrote a Victorian American novel for my senior thesis in college,” she says. “It was a natural pick for me to write a historical novel. It was a setting I knew well. [The novel] was nothing that I would want to publish, but I fell in love with the process. From there, I kept writing every day.”

Elliott says writing her first novel was a long, tedious process. “I had been shopping my novel around, and I got an agent, which was huge, but then she decided to quit being an agent,” Elliott says. “I was five months pregnant and we were living on my husband’s grad student stipend. I couldn’t really see [writing] as a career and felt I had gone back to square one.”

Click here too read this article from the Maryland Community News