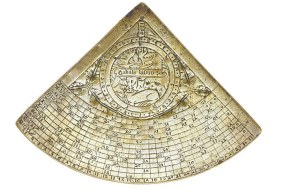 A 14th-century quadrant discovered in a shed in Queensland has failed to sell at auction in London. The ancient brass timepiece, which is marked with the badge of King Richard II, had been expected to fetch more than $300,000.

But the reserve was not met and the quadrant was passed in at auction house Bonhams.

The quadrant had spent much of its recent life in a shed on a Queensland property where it was used as a toy by Christopher Becker in the mid-1970s. Mr Becker later kept it on a shelf as a memento of his childhood, but at the start of this year he decided to delve into the object's past.

He discovered the small artefact was actually the world's second-earliest known time instrument, dating from 1396.

Click here to read this article from ABC News