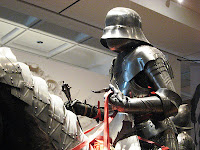 A German octogenarian puts his lifelong fascination with armour under the hammer Tuesday when the largest private collection of medieval weapons goes on sale for millions of euros.

The collection, valued at between three and four million euros ($4-5.4 million), goes up for auction in Brussels and includes not only classical armour and weaponry such as shields, helmets and swords, but also crustaceans.

"Man does not have a shell, he had to make one," collector Karsten Klingbeil, from Berlin, told AFP, of his interest in the art of defence.

"You really can't move in it because we have a totally different morphology from the period," he said, explaining that when he was younger he used to try on the armour.