A £1 million plan was launched on Monday night to reinvent the ruins of Coventry Cathedral. It includes opening up three underground crypts and displaying pieces of priceless medieval stained glass.

Two new statues will also be unveiled, one to the 32,000 civilians killed in the Allied bombing of Dresden and Hamburg. And the ruin itself, already a world-famous symbol for peace and reconciliation, will be rededicated to all civilians killed in conflict. 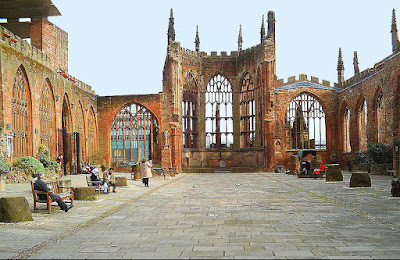 The plans were unveiled by cathedral officials and Dr Jonathan Foyle, of the World Monuments Fund, on the 71st anniversary of the Coventry Blitz.

The £1million target includes the cost of urgent repairs, including stabilising and fixing a huge crack which threatens to destroy one of the ancient sandstone walls.

Click here to read this article from the Coventry Telegraph