Sandal Castle: Celebrations to delve into battle’s past 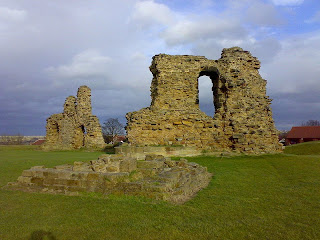 A battle that changed the course of English history will be remembered during celebrations at Sandal Castle at Wakefield on New Year’s Eve.

Medieval weapons, clothes and crafts from the era of the Battle of Wakefield will be used by the Frei Compagnie re-enactors to help bring 15th century history to life.

On December 30, 1460, Richard, Duke of York – the disputed king of England – and his small army of around 5,000 left the safety of Sandal Castle, pictured, only to be overwhelmed by King Henry VI’s Lancastrian forces estimated at 15,000 strong during the Wars of the Roses.

Richard and his 17-year-old son Edmund, Earl of Rutland, were killed in the slaughter and their heads infamously stuck on poles at Micklegate Bar in York.