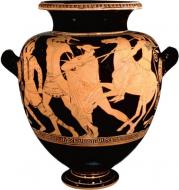 Wine flowed freely from ancient Greece during its golden age, but new work suggests nuts and various herbs were also in demand.

With the help of DNA analysis, scientists are getting a present-day look at centuries-old trade in the Mediterranean. Such studies may help debunk some long-held assumptions, namely that the bulk of Greek commerce revolved around wine.

During the fifth through third centuries B.C., the Mediterranean and Black seas were major thoroughfares for ships loaded with thousands of curvaceous jars known as amphorae, thought from their shape to contain a drink made from fermented grape juice.

But only recently have researchers peered through the lens of 21st century genetics to identify the actual remnants of the jars’ long-disappeared cargo. Analyses of DNA fragments from the interior of nine jars from Mediterranean shipwrecks now reveal various combinations of olive, ginger, walnut and herbs in the rosemary family, along with the expected grapes.

Click here to read this article from Science News