The hilltop of Abbey Craig is best-known as the site of the National Wallace Monument, which commemorates the 13th-century Battle of Stirling Bridge. But while the Scottish commander William Wallace reportedly watched the armies of Edward I massing from the rocky outcrop before his famous victory in 1297, the site might have witnessed another violent clash several centuries earlier.

A hillfort comprising a single oval bank with another rampart 30m further down the slope, was first recorded on the summit in the 18th century. Originally interpreted as the camp of Wallace’s troops, recent investigations revealed the structure was much older, as charcoal recovered from the inner rampart returned a radiocarbon date of AD 560-730. 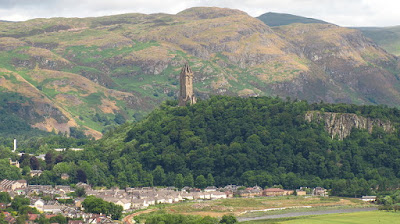 Stirling Council Archaeology Officer Murray Cook, who in September led a community excavation at the site, said this means the fort could have been one of the main centres of the Gododdin, a Britonnic people who lived in northeast England and southern Scotland. Part of this tribe formed the kingdom of Manaw, which local place names such as Clackmannan and Slamannan suggest could have included the area around Abbey Craig. But this high-status settlement also appears to have come to a dramatic end, destroyed by a fire so intense that its stones fused together.

Click here to read this article from Current Archaeology