'Mummified' trees found in Norway date back to the 13th century

Norwegian scientists have found “mummified” pine trees, dead for nearly 500 years yet without decomposition. The discovery could lead to a wealth of information for scholars examining the medieval environment.

Dated to the early 1200s, the 40 dead Scotch pines were found scattered among living trees in what was once a dense forest that supplied wood for medieval boats and churches.

Norway’s wet climate seems perfect for encouraging organic matter to rot – particularly in Sogndal, located on Norway’s southwestern coastline, in one of the most humid, mild areas of the country.

“We were gathering samples of dead trees to reconstruct summer temperatures in western Norway, when our dendrochronological dating showed the wood to be much older than expected”, says Terje Thun, an associate professor at the Norwegian University of Science and Technology’s (NTNU) Museum of Natural History and Archaeology. Thun conducted the work with his colleague Helene Løvstrand Svarva. 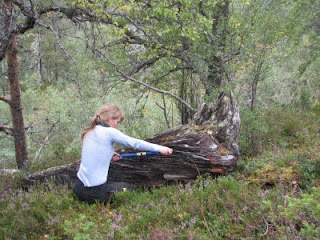 “We were astounded to find fresh wood in trees that started to grow in the late 1200s and had died almost 500 years ago, which is much older than we originally expected. Somehow they have kept from decomposing for several centuries in this humid climate”, Thun says. “This is quite extraordinary - I would go as far as to call it sensational.”

Thun suspects the trees stayed so fresh for two reasons. The first is that many of the trees had either remained upright or fallen on rocks, avoiding exposure to the wet ground. Secondly, pines are full of resin, which protects them against wood-eating bacteria. At death, pines release large amounts of resin, which could have helped delay decomposition.

“Many of the trunks we dated turned out to have seeded in the early 1200s, and had lived for more than 100 years at the time of the Black Death around 1350”, Thun says. “That means that the dead wood has ‘survived’ in nature for more 800 years without breaking down.”

The Norwegians living along the coast of present-day Sogndal in the 12th and 13th centuries apparently favored the robust pines, Thun's study shows.

Timber from a stave church—a distinctive medieval church built by the Vikings—matches wood from the forest that contains the dead trees.

The Norse peoples likely trekked to inland forests to hunt and harvest trees for their buildings, he added.